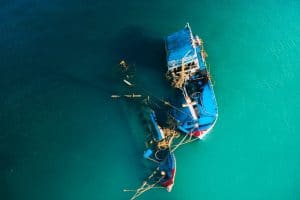 Due to the speed boats travel, passengers riding in boats are at high risk of sustaining serious spinal cord injuries that could potentially result in paralysis. Additionally, a severe blow to the head caused by a boating accident could cause a brain injury. Serious injuries could elicit fatal results if a passenger falls overboard. Not surprisingly, the number one cause of death in boating accidents is in fact drowning which sadly occurs when a passenger is knocked unconscious and then falls into the water.

The following are the primary contributing factors of accidents and casualties in boating accidents:

Commercial boating accidents resulting from owner/operator negligence are often cause for legal action. Negligence from these owners/operators are usually from speeding, driving under the influence, driving habits or reckless driving. More importantly, owners of commercial boats are required to perform routine maintenance checks to ensure that the vessel and its parts are functioning correctly. Commercial boats like commercial trucks are very large and if routine maintenance is not properly performed these large boats can be extremely dangerous. Failure to do so could result in a serious boating accident-causing personal injury and/or wrongful death to passengers of all boats involved including but not limited to kayakers, paddle boarders or individuals on a deck. Also, commercial boat owners are liable for accidents caused by the negligent behavior on their part or by their agents and employees.

The following boating accident statistics are derived from studies conducted by the United States Coast Guard in 2019:

Of the 11,878,542 registered boats in operation in the United States in 2019, there were 4,168 reported accidents. There were approximately 613 deaths caused as a result of these boating accidents and more than $55 Million in property damage. The following are additional statistics from the United States Coast Guard for 2019:

More than 79% of all deaths caused by boating accidents are judged to be the result of drowning. Passengers are often knocked unconscious prior to falling overboard, preventing them from staying afloat and being rescued. Although personal flotation devices are designed to protect against such a circumstance, statistics have shown that 90% of all drowning victims were not wearing a PFD.

There are certain circumstances that require the reporting of a boating accident: