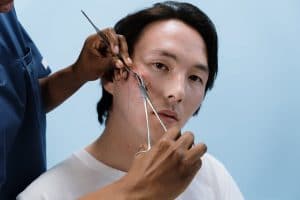 A laceration, or cut, is a common injury to get in a vehicle accident. They can also result from slips, trip, or fall, and many other causes.

Lacerations are cuts or tears of the skin caused by a sharp object, such as exposed metal edges or broken glass. Laceration wounds have a wide range of severity from surface to deep and can even be fatal. Long-term effects resulting from certain cuts and lacerations can be challenging.

This page gives an overview of laceration injuries. If you have suffered cuts or lacerations as the result of a vehicle or boating accident in Florida, please contact the attorneys at the Ledezma Law Firm.

Lacerations can occur anywhere on the body. Common lacerations sustained in vehicle accidents include facial and extremity cuts. To minimize scarring and prevent permanent scaring, facial lacerations can require immediate and often long-term care. A deep cut can go through skin all the way down to the bone – cutting tendons and muscles on the way. The deeper the laceration, the more serious the consequences, especially if damage goes into the muscle or bone. Even seemingly superficial wounds can lead to severe secondary infections which can cause the loss of limbs or even death.

Even if the laceration was not that great, lacerations to the head can be life threatening, even if the injuries do not appear to be great. Secondary infections of even the most insignificant laceration can end up being life threatening. Other types of open wounds, similar to lacerations are often found in vehicle injury cases: puncture wounds and abrasions. These types of wounds usually do not bleed excessively and can appear to close up. An abrasion is a wound caused by superficial damage to the skin, no deeper than the epidermis (the top layer of the skin) usually caused by a rubbing of the skin on a rough surface. These types of wounds are prone to infection and should be treated immediately.

The Ledezma Law Firm recently had a case where our client was rear-ended by another vehicle and the impact of the collision resulted in the client’s head being jerked backwards hitting a metal bar. My client sustained a deep gash in his scalp which resulted in a concussion. He needed to get stiches due to his head hitting the metal bar. Thankfully, the Ledezma Law Firm was able to get him a great settlement and justice was accomplished.